While researching the Lowcock surname I came across Private William Mackenzie Lowcock was a Private in World War II, was captured by the Japanese, and was a Prisoner of War (POW). Bill survived the war, married and raised a family in Australia. Bill’s story is available to buy on Amazon (both as a Kindle and or print edition).

In honor of his memory and service, I am sharing the information I discovered. Bill is my 2nd cousin, 2x removed.

Private William (Bill) Mackenzie Lowcock was an Australian soldier who served in Singapore, Malaysia, and Thailand. He was captured by the Japanese (source) and as a Prisoner of War was forced to work on the Burma Railway. Bill married Mavis (nee Walker) and they raised a family.

Private Bill Lowcock is recorded on a Prisoner of War Memorial in Ballarat.

The initials RTA are after the name of Bill and other prisoners, meaning “Repatriated to Australia”. 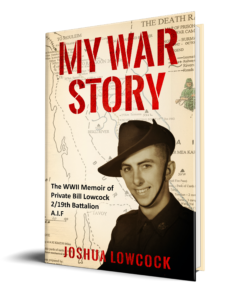 Bill recorded his experiences as an Australian in Singapore during World War II and as a Prisoner of War working on the Thai-Burma Railway.

Private Lowcock’s memoir is available to buy on Amazon.

I never met Bill Lowcock but according to my research on Ancestry research, we are related. From my amateur family history on the Lowcock surname, Bill is my second cousin, twice removed. If you are an immediate family of Bill Lowcock, please contact me.

I also have research on other Lowcock’s who served on the Lowcock War Memorial pages.

There’s a photo on the National Library of Australia of Bill and Mavis’s daughter Judy Lowcock celebrating her birthday in 1964. Bill and Mavis Lowcock built the filtered pool on the riverbank in front of Roselea Motel in the early 1960s. The Lowcock’s had purchased the property, including Roselea Flats, in circa 1957. In about 1961 they demolished the flats and erected the Roselea Motel on the site by early 1962 Bill Lowcock is credited as part of the Chamber of Commerce who came up with the name of the Sunshine Coast.

The diary of Bill Lowcock’s experience is available on Amazon as a Kindle book, you can purchase it here.

If you would like to learn more about the Lowcock surname and family history, please visit the Lowcock History page.

You can learn more about Lowcock Genealogy, or specific Lowcock family member:

This page is maintained by Joshua Lowcock.